Keeter’s stance on gun control is similar to the stance of most Americans. Their views tend to fluctuate depending on recent events, with shootings prompting more Americans to support gun control according to Frank Newport, editor-in-chief of Gallup.

A poll done by Pew Research Center in August 2016 indicated that 46 percent of Americans support gun control; however, in April of this year that number had risen to 51 percent.

Gallup polling has also shown that American’s are increasingly becoming less hostile to gun control. On Oct. 16, a Gallup survey found that 60 percent of Americans agree that laws covering the sale of firearms should be stricter.

“Gun control is not like support for marijuana,” Newport said. “It tends to vary over time depending on what happens in the news.”

The reason most Americans are not ready to support an outright ban on things like assault weapons and other military-style weapons, is because gun ownership is part of their identity, according to Craig Whitney, author of Living With Guns: A Liberal’s Case for the Second Amendment.

“Americans have always had a feeling that they owe their freedom to firearms,” Whitney said. “Settlers and colonialists couldn’t have survived without guns.”

The Second Amendment and the Courts

“The second amendment is certainly something a lot of Americans identify with,” Whitney said.

“The case that broke the mold was D.C. v. Heller,” Stephen Wermiel, a constitutional law professor at American University Washington College of Law, said. “Prior to that the Supreme Court indirectly implied that the second amendment was not about an individual’s right to bear arms.”

In the D.C. v. Heller case, the court ruled that the second amendment protects an individual’s right to possess a firearm even if they are not connected to a militia.

After the case, many conservative states are now loosening restrictions on gun ownership according to Wermiel, further marrying the American to his gun.

“Many states have now allowed concealed carry after the 2008 decision,” Wermiel said.

The Influence of the NRA

Despite the deep-rootedness of guns in American society and the divide on serious gun reform, there are some measures that have strong support. A July 2015 Pew poll showed that 85 percent of Americans support background checks for gun shows and private sales, 79 percent support laws to prevent mentally ill people from buying guns, and 70 percent support a federal database to track gun sales. 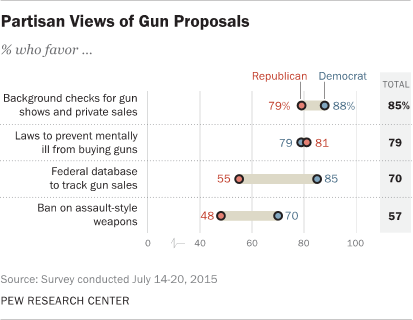 However, despite this broad support, no legislation has been enacted to include these restrictions, mainly due to lobbying efforts of groups like the National Rifle Association.

“The NRA has such extreme views,” Whitney said. “They pretty much say any regulation to make things safer is just a trap to take your firearms away from you.”

A June Pew Poll shows that 44 percent of Americans believe the NRA has too much influence over gun legislation.

Caryn Ray, a retired biologist, believes the NRA is out of control and is impeding gun control legislation from being enacted.

“As long as the NRA is donating to people on the hill, I can’t see how we are going to make any steps forward,” Ray said. “Unless we the people come together and demand it.”

According to OpenSecrets, the NRA made over $1 million in direct campaign contributions during the 2016 election cycle. About 99 percent of those contributions went to Republican candidates.

“The NRA owns virtually all the Republican politicians,” Erin Copeland, a William and Mary college student, said. “And they control all three branches of the government now.”

“Because of the NRA the congress is frozen on legislation,” Whitney added. “However, progress can be made at the state and local level and that’s where people should look.”