Millennial voters on campuses across the country are just beginning to process the reality of Tuesday’s election.

Some are in denial. Some are rethinking the impact of their first vote. Some are celebrating. Some are burning flags.

Millennials were a voting bloc in the 2012 election, when 60 percent of those 18-29 voted for Obama. Though Hillary Clinton hoped for an even greater level of support, she drew 55 percent of the 18-29 vote, according to The New York Times exit polls.

Students at Howard University, George Washington University, American University and Catholic University — demographically diverse campuses in left-leaning Washington, D.C. — expressed enthusiasm about finally participating in the political process. But some were hard-pressed to mask their feelings about the next administration.

At one extreme, on the American University campus, students gathered to protest Trump’s election and burned American flags. 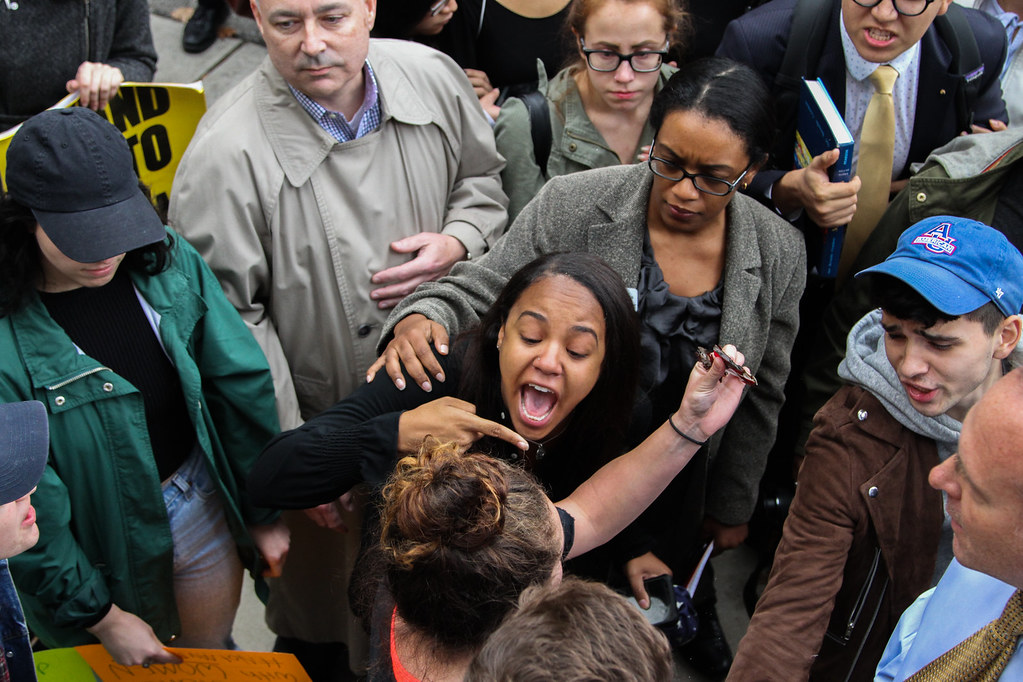 Click through to see captions. (Photos by Taylor Hartz.)

Post-election tensions also flared Tuesday night on West Coast campuses where students at University of California Berkeley chanted “not our president” and lit flares. At University of Oregon, hundreds of protestors shouted obscenities about the president-elect, according to local media.

In Washington, D.C., Doreen Lewis, a 28-year-old Catholic University student and independent voter, invoked a famous line from the early days of the Iraq War when asked about the election results.

“My initial thoughts this morning were shock and awe. I was not necessarily a supporter of one candidate or the other, I simply experienced a lot of shock and disappointment in our country,” Lewis said.

Eighteen-year-old first-time voter, student Michael Klein, who called himself conservative and voted for Trump, said that Clinton shouldn’t be counted out. She will be part of the Democratic equation for maintaining political law and order, he said.

Catholic University freshman Claire Gallagher was less hopeful about Democratic influence on future policy. “Since Trump doesn’t have any plans he will just take away those of others. He will take away Obamacare and Planned Parenthood. So we will have to do certain things illegally as the legal right will be taken away.”

Gallagher’s friend Christie Graham said she would be more open to Trump’s presidency if he would take ownership of his divisive comments.

“I would love it if Trump would take responsibility for what he said and the hurt it has caused,” she said. “He is trying to represent America and tearing it down at the same time.”

At George Washington University, the mood was subdued and reflective.

Ahad Ahmed, a 20-year-old Pakistani student who was hoping to vote in 2020 but now fears he will have to leave the U.S. after his student visa expires, was unsure about the real Donald Trump.

“I hope that what we are hearing from Trump will not be transpiring. The most concerning thing will be immigration and his tough stance,” he said. “Hopefully this won’t happen as he described and it was merely a ploy to get elected.”

Megan Larson, a GW freshman voted in California and thought Clinton would win. She was most shocked by Clinton’s poor showing in the midwest. “If Democratic strongholds can go right, what hope is there for us?”

Her roommate Mahuum Naqvi, a Clinton supporter in upstate New York was vexed about changing standards of acceptability. “I wasn’t prepared for what was going to happen. Now I’m kind of scared, not going to lie. People seem to be okay with certain things now that were not acceptable before. We need more support for the many who are offended by what Trump said.”

An election, then fears

Ayanna Green, a freshman at Howard University and Clinton voters had high hopes for Clinton until the early returns came in. Then her fears of a Trump presidency started percolating.

“There is nothing he (Trump) could do or say to make me feel more comfortable. He is very clear about his views and doesn’t filter anything. I feel that a good chunk of the country did not want to see a female president and that will show up in his policies.”